I agree with President Obama’s statement, but rarely do elections mean different results.  Even though parties may change, the business of government rarely does.

One 8pm Warrior aims to change that.

Meet Scott Walker, Governor of Wisconsin and this week’s 8pm Warrior of the Week. 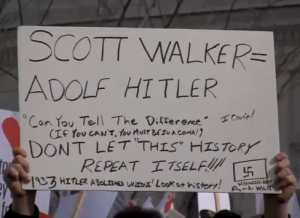 Like his policies or not (I wasn’t a big fan of killing high speed rail), you have to give him credit for doing what he promised and working towards the financial reform he was elected for.

He’s barely been in Madison for a month, and he’s already got 70,000 union members protesting his plans to cut the state budget and change the way unions control the government.  It reminds me of Greece and Paris lately.  No doubt that tough times are ahead for him, but I believe that if you’re not making someone uncomfortable, you’re probably not making real changes.

He was elected 52% to 46% by campaigning to make these sorts of significant changes in a State facing a $3,000,000,000 budget shortfall.  Now he’s working hard and fast to complete needed changes quickly, much like 8pm Warriors around the country have to do every day to survive and thrive.  That’s why Governor Scott Walker is this week’s 8pm Warrior of the Week.

4 comments on “Warrior of the Week: Governor Scott Walker”