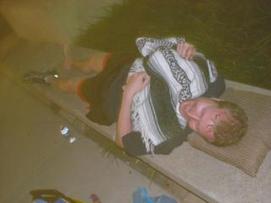 In just one more example of a Milwaukee-Is-Back type fanatic…last baseball season, 36 year-old Washington D.C. native and Milwaukee Brewers fanatic Chris Jollay made a bet with a college buddy (David Christman), a Phillies fan, that his Brewers would win more games than the Phillies.

If Jollay won, he would trade homes for a bit with Christman. Christman would become a bachelor in Jollay’s pad, and Jollay would enjoy the home cooked meals and company of Christman’s wife for a week.

If Christman won, Jollay would live homeless on the streets of Washington D.C.

Although the Brew Crew had a great year with 83 victories, the Phillies ended up with 87…

So, true to his word, this July he packed up and hit the streets of Washington D.C.

Read more about it here:
http://www.sportsbybrooks.com/brewers-fan-loses-bet-forced-to-go-homeless-18875

This year he should have no problem winning the bet!

Never Give Up!
The New iOS 5 Update for iPhone 4: Download Problems & Greatness
The Hierarchy of Teamwork