In the social media frenzy of getting more friends, followers, Klout, etc. I think some have forgotten about people. I know I do sometimes.

However, aren’t people the whole point of the social web?

In March, I wrote about the 3 Behaviors that are Social Selfish and today I want to add #4:  Wasting time unhelping people who ask for help.

Today, someone with 260,000 followers retweeted my post about the Menards Website Hacking fiasco I discovered.  Very kind of Dave.  One of my other friends Jeremy Holmes thought it was too bad that he didn’t offer the mention with the retweet, so I messaged Dave to ask about it. After all, he had already found it interesting enough to retweet once and it couldn’t hurt to ask if he’d help out.

Here’s what I sent:

“Just a humble request. Can you retweet the Menards blog post with my tweet meme link http://bit.ly/mLYVmJ and @Biebert mention? Thanks!”

This is what I got:

“Apologies, can’t do it. Have to be consistent. We get a TON of special requests, can’t show favoritism. Sorry.”

I didn’t get how someone could call giving credit on a retweet a “special request.” I thought that was just the courteous thing to do.

The warrior side of me came out and I got irritated. Some good friends jumped in to defend the concept of giving credit and what proceeded was an hour long public debate as he lectured me on the standards of giving credit and everyone ganged up on the poor guy. Now we’re both writing blogs about our experience and what we learned.

Here’s my general take on the topic. For me, a simple “No” would have been fine.  I understand how valuable time is, especially to someone who has that many followers. I can only imagine how much contact he has to deal with.  However, what I didn’t understand was saying no to someone in order to save time and then wasting the extra time lecturing them. It’s so much easier just to help people, at least in my smaller world.

It only makes sense. 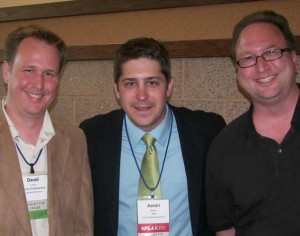 At the end of the day, social media is still about people.  Sometimes we forget that. I know I do.

Some of the best relationships I have through social media are with regular people that have fewer than 5,000 connections.  I have laughed with them, learned from them, and even cried with them.  Yet I’ve never met them.

People are the magic of social media!

Have a generous night,

Social Media Causes a Stir in the Medical World
Attention Era: Why You Should “Like” What You Like
5 Symptoms of the Anorexic Organization

12 comments on “Social Media is More Than Links, Klout, or Followers”