We need each other to make this work.

Instead of the one-way communications of the “old internet”, Web 2.0 is about each of us contributing to a much more interactive and informative network that consists of blogs, tweets, wikis, facebook posts, videos, pictures, and the comments and follow-up discussions that go with them.

We are the creators of the new internet.

The tools we use for the new web are called “Social Media” (think Social Studies, not Social Hour), and they have changed the world we live in.  Instead of sitting in a virtual “lecture hall” listening to a few websites do all the talking (think 1990’s), we are now all in a digital “convention hall” discussing amongst ourselves in one great conversation. 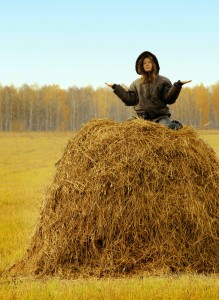 With such a level playing field, the new challenge is not the availability of information, but rather the hunt for the “good stuff”.

I have absolutely no idea how I would find the best of it without your help.  The content I need is a needle in a haystack without your sharing, liking, bookmarking, reblogging, commenting, and linking to it. Obviously search engines are part of the solution, but they need your help too.

That’s why “Sharing is Caring.”

While reading Warren Buffett’s letter to the Berkshire Hathaway shareholders last week, I came across something very interesting.

Apparently, Warren Buffett just hired 39-year-old Todd Combs as part of his succession plan.  Some are up in arms, saying he “lacks experience” and is too green.  Since Todd and I share the same generation, I was intrigued by the following explanation by the “Oracle of Omaha” himself:

“Our goal was to find a 2-year-old Secretariat, not a 10-year-old Seabiscuit.”
– Warren Buffett

I want to be clear that I have absolutely no problem with experienced people.  In fact, I’m on the lookout for an experienced mentor myself.  I believe that experience may bring additional maturity, strength, and other positive traits to a person.

However, in a time when our world is changing faster than ever before, I want to caution people who focus on “experience” rather than talent and learning ability.

Just look at the last 10 years, as Google went mainstream and some of the most popular marketing tools in the world wove themselves into the fabric our lives:

The Attention Age has begun!

With New Media entering the stage, business leaders must deal with 24 hour news cycles and the collective attention span of a world constantly seeking out the next big thing.

Whether you’re a “10-year-old Seabiscuit” or a “2-year-old Secretariat”, one thing is for certain:

Experience isn’t as important as it used to be.

We’re all students in these new and exciting times, and the leaders who are best with creativity, learning, and vision will win big.

Todd, I’ll be cheering you on.

It’s my wife’s birthday tomorrow and I took her and my two kids to the Circus this evening.  At several points there were so many great acts going on at one time, it was tough deciding what to watch.

When I mentioned this to my wife, she kindly informed me that this was typical and dated back to early circus styles.  It’s no wonder most traditional circus companies have gone out of business while modern and focused shows like Cirque du Soleil continue to grow in popularity.  It’s about telling a great story.  One chapter at a time.

Is your company a circus? 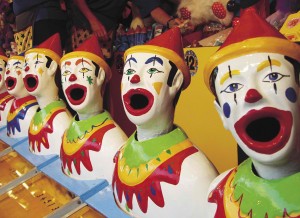 I don’t mean this in a bad way.  The performers in the arena were absolutely phenomenal and I was very impressed.  It’s just that sometimes they had 12 people all doing their own tricks at the same time, periodically making a frustrating experience rather than one cohesive program.

Lately, I’ve been spending a lot of my time in marketing leadership and branding, and while studying several companies I’ve found that the Shriner’s Circus isn’t the only one in town.  It seems to be a challenge for many 8pm Warriors that have several great stories to tell, multiple positive events happening, and so many good ideas.  Instead of synergy, we get quite the opposite.  We get a corporate circus.

Let me know if this sounds familiar:

They’re all good things on their own, but from an outsider’s perspective it’s hard to focus on one story.  It’s like telling three stories at one time.

This is something to think about if you’re in leadership trying to reach customers who only have so much time and attention to give you.

Weave it all together. Have one voice.  Tell a great story!

I don’t mean this to be a bad thing.  Often times, people only recite half the famous poem, making it look like a bad thing by ending at “master of none”.  But the poem actually finishes like this:

“Jack of all trades,
master of none,
though often times better
than master of one” 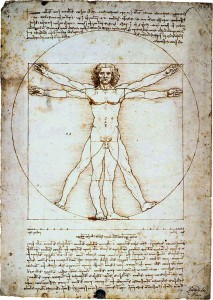 And I couldn’t agree more.  Just look at two of my favorite 8pm Warrior polymaths of all time:  Benjamin Franklin and Leonardo Da Vinci. After looking at their history and my own experiences, I believe that a person’s creativity is limited by their scope of experiences and understanding.  The biggest creations happen when two different concepts are fused together to change the world…hard to do when you only know one set of skills.

How does this apply to modern times?

With the Mechanical Turk, advancing robotics, and a seemingly endless and relentless flood of technical specialists coming out of Asia, things don’t look good for those who lack creativity.  Luckily for many western countries (like the US), this may be one of our strategic advantages for years to come.

Instead of locking our kids down to master one thing (sorry Amy Chua, author of the Battle Hymn of the Tiger Mother), I think that the future of extremely successful 8pm Warriors will be in creating solutions and ideas, not mastering them.

Apparently other CEO’s of the world agree.

Have a diverse (and creative) night,

So many people think they have a choice if they want to change or not.  However, reality is that we’ll either decide to make small changes as times and technology change, or make big ones when we get behind and have no other choice.

How will you deal with  inevitable changes?

8pm Warriors should spend some of their evening time researching, learning, and changing ahead of the curve, not behind it.  (Have you checked out Quora yet?)